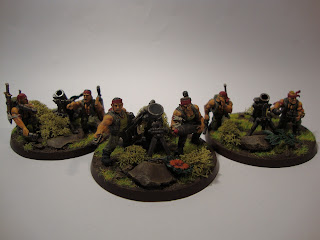 Took me a while to get these done. The old school mortar from Drax was really fast to do as i just absolutely love that team! But the two next ones was to familiar to the other HWTs i did, but also the fact that i been painting alot lately is leaving its mark.

R3T is in less than 14 days and i still need to paint the basilisk, another squad of mortars and 1 objective marker. I will not compromise on my painting, so no rushing being sloppy from my part just to make it. If i don't make it, then i don't make it. After all i have to look at my models long after the tournament is over. 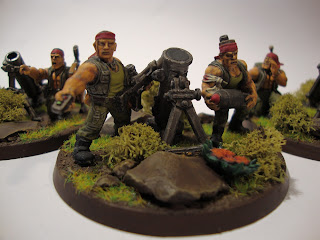 But back to the objective marker. You guys have any idea what to put on it? I really want something to fit in with the army and at the same time look great. We all know Drax amazing Objective marker and even tho making one as awesome one as his is close to impossible, i would like something down that road(In the term of awesomeness!).

My thought have been on a jungle fighter dragging another mate wounded mate trough the jungle. But that will require green stuff and heavy converting to look good. So if any of you guys got any ideas please tell me!
Posted by Rasmus Olesen at 9:29 AM

Join me on my journey of collecting, painting and playing a Catachan jungle fighter army in the game of Warhammer 40.000.

Here you will find:
-Progress on my army.
-Painting tips.
-Battle reports
-Tips i might find and share with you guys
-My thoughts on playing a Catachan jungle fighter army

Rasmus Olesen
Aalborg, Denmark
Come visit me on youtube at channel Zacret. If you need to contact me then send me a mail at zacret82@gmaildotcom